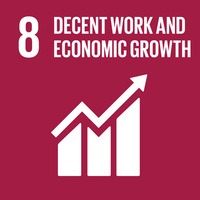 PROMOTE SUSTAINED, INCLUSIVE AND SUSTAINABLE ECONOMIC GROWTH, FULL AND PRODUCTIVE EMPLOYMENT AND DECENT WORK FOR ALL

8.1 Sustain per capita economic growth in accordance with national circumstances, and in particular at least 7% per annum GDP growth in the least-developed countries

8.2 Achieve higher levels of productivity of economies through diversification, technological upgrading and innovation, including through a focus on high value added and labor-intensive sectors

8.5 By 2030, achieve full and productive employment and decent work for all women and men, including for young people and persons with disabilities, and equal pay for work of equal value

8.6 By 2020, substantially reduce the proportion of youth not in employment, education or training

8.7 Take immediate and effective measures to secure the prohibition and elimination of the worst forms of child labor, eradicate forced labor, and by 2025 end child labor in all its forms including recruitment and use of child soldiers

8.8 Protect labor rights and promote safe and secure working environments of all workers, including migrant workers, particularly women migrants, and those in precarious employment

8.10 strengthen the capacity of domestic financial institutions to encourage and to expand access to banking, insurance and financial services for all

8.a. Increase Aid for Trade support for developing countries, particularly LDCs, including through the Enhanced Integrated Framework for LDCs

8.b. By 2020, develop and operationalize a global strategy for youth employment and implement the ILO Global Jobs Pact