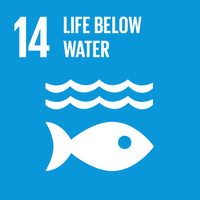 CONSERVE AND SUSTAINABLY USE THE OCEANS, SEAS AND MARINE RESOURCES FOR SUSTAINABLE DEVELOPMENT

14.1 By 2025, prevent and significantly reduce marine pollution of all kinds, particularly from land-based activities, including marine debris and nutrient pollution

14.2 By 2020, sustainably manage and protect marine and coastal ecosystems to avoid significant adverse impacts, including by strengthening their resilience, and take action for their restoration, to achieve healthy and productive oceans

14.3 Minimize and address the impacts of ocean acidification, including through enhanced scientific cooperation at all levels

14.4 By 2020, effectively regulate harvesting, and end overfishing, illegal, unreported and unregulated (IUU) fishing and destructive fishing practices and implement science-based management plans, to restore fish stocks in the shortest time feasible at least to levels that can produce maximum sustainable yield as determined by their biological characteristics

14.5 By 2020, conserve at least 10 per cent of coastal and marine areas, consistent with national and international law and based on best available scientific information

14.7 By 2030, increase the economic benefits to SIDS and LDCs from the sustainable use of marine resources, including through sustainable management of fisheries, aquaculture and tourism

14.a Increase scientific knowledge, develop research capacities and transfer marine technology taking into account the Intergovernmental Oceanographic Commission Criteria and Guidelines on the Transfer of Marine Technology, in order to improve ocean health and to enhance the contribution of marine biodiversity to the development of developing countries, in particular SIDS and LDCs

14.b Provide access of small-scale artisanal fishers to marine resources and markets

14.c Ensure the full implementation of international law, as reflected in UNCLOS for states parties to it, including, where applicable, existing regional and international regimes for the conservation and sustainable use of oceans and their resources by their parties

50% of certified fresh fish
Score by

2.7 Management of containers and packaging
WikiRating
8 16
keyboard_arrow_down
Export: csv / json
Content is available under the Creative Commons- Attribution 4.0 International License; additional terms may apply. See Terms of Use for details.
WikiRate is a registered trademark of The WikiRate Project e.V., a nonprofit organization based in Berlin, Germany.
Legal: Privacy Policy | Licensing | Disclaimers | Terms of Use | Notice Powered by Decko