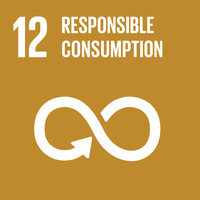 12.1 Implement the 10-Year Framework of Programs on sustainable consumption and production (10YFP), all countries taking action, with developed countries taking the lead, taking into account the development and capabilities of developing countries

12.2 By 2030, achieve sustainable management and efficient use of natural resources

12.3 By 2030, halve per capita global food waste at the retail and consumer level, and reduce food losses along production and supply chains including post-harvest losses

12.4 By 2020, achieve environmentally sound management of chemicals and all wastes throughout their life cycle in accordance with agreed international frameworks and significantly reduce their release to air, water and soil to minimize their adverse impacts on human health and the environment

12.6 Encourage companies, especially large and trans-national companies, to adopt sustainable practices and to integrate sustainability information into their reporting cycle

12.7 Promote public procurement practices that are sustainable in accordance with national policies and priorities

12.8 By 2030, ensure that people everywhere have the relevant information and awareness for sustainable development and lifestyles in harmony with nature

12.a Support developing countries to strengthen their scientific and technological capacities to move towards more sustainable patterns of consumption and production

12.c Rationalize inefficient fossil fuel subsidies that encourage wasteful consumption by removing market distortions, in accordance with national circumstances, including by restructuring taxation and phasing out those harmful subsidies, where they exist, to reflect their environmental impacts, taking fully into account the specific needs and conditions of developing countries and minimizing the possible adverse impacts on their development in a manner that protects the poor and the affected communities