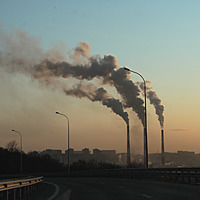 GHG emissions are a major contributor to climate change and are governed by the United Nations (UN) ‘Framework Convention on Climate Change’ and the subsequent UN ‘Kyoto Protocol’. They include:

Some GHGs, including methane, are also air pollutants that have significant adverse impacts on ecosystems, air quality, agriculture, and human and animal health.

As a result, different national and international regulations and incentive systems, such as emissions trading, aim to control the volume and reward the reduction of GHG emissions.

The GHG Protocol has established a classification of GHG emissions called ‘Scope’: Scope 1, Scope 2 and Scope 3. The GHG emissions standard published by the International Organization for Standardization (ISO), ‘ISO 14064’, represents these classifications of Scope with the following terms:

Pollutants such as Nitrogen oxides (NOX), sulfur oxides (SOX), and other significant air emissions have adverse effects on climate, ecosystems, air quality, habitats, agriculture, and human and animal health. Deterioration of air quality, acidification, forest degradation and public health concerns have led to local and international regulations to control emissions of these pollutants.

Reductions in the emission of regulated pollutants lead to improved health conditions for workers and local communities and can enhance relations with affected stakeholders. In regions with emission caps, the volume of emissions also has direct cost implications.

Other significant air emissions include, for example, persistent organic pollutants or particulate matter, as well as air emissions that are regulated under international conventions and/or national laws or regulations, including those listed on an organization’s environmental permits.

Objective to reduce logistics emissions by 20%.
Research
8 16
keyboard_arrow_down
Export: csv / json
Content is available under the Creative Commons- Attribution 4.0 International License; additional terms may apply. See Terms of Use for details.
WikiRate is a registered trademark of The WikiRate Project e.V., a nonprofit organization based in Berlin, Germany.
Legal: Privacy Policy | Licensing | Disclaimers | Terms of Use | Notice Powered by Decko